Maybe, you’ve never seen a Japanese Wrestling pay-per-view. Maybe, you’re not even remotely familiar with the product or its talents. Maybe, you find the language barrier to be too great. Whatever the case may be, I absolutely promise you one thing, none of that matters. Wrestle Kingdom 9 is a must-watch. Let me tell you why.

Believe me, I get it. Blindly trying to get into a totally different product can seem very, very imposing for most casual American wrestling fans. Luckily enough for me, I have been loosely fimiliar with New Japan Pro Wreslting’s product for years and have been a long-time classic Japanese wrestling fan forever. Great and legendary Japanese wrestlers like Jushin “Thunder” Liger, The Great Muta, Hayabusa, The Great Sasuke, Tiger Mask and the like all drew me in and the rest is history. Go look those guys up sometime if you haven’t already. But, before you take my previous knowledge of the Japanese product as the only reason I enjoyed Wrestle Kingdom, don’t stop reading yet. Previous exposure to the style is by no means why I decided to watch the historic Japanese show this past January. In fact, by all means, go into this show blindly with no expectations. Don’t google anything. Don’t read up on the card. Don’t try and recognize any names before your first watch through. It’ll make the experience that much more exciting and fresh. Also keep in mind that today’s Japanese Wrestling scene is pretty different from years predating. So, don’t go into this event negatively based on any previous limited knowledge. Nearly gone are the dreary days where rather boring giants would mat wrestle in front of a deadly quiet crowd. Today, the action (whether super junior or otherwise) is fast-paced, hard-hitting and most of all, exciting to watch! Another element of old Japanese wrestling that has been shed is the lack of a healthy roster of showmen. Today, you can find some of the most charismatic and entertaining workers in the current market on Japanese cards everywhere, especiall New Japan Pro Wrestling. Anything from comedy and high flying to scientific skill and near-MMA high-impact style are all covered bases by Japan’s number one wrestling company. The variety that New Japan Pro Wrestling currently offers is matched by none, I’d argue. Wrestle Kingdom 9 showcased this fantastically.

Why was the show itself so good? I’m going to address that as thoroughly as I possibly can, assuming most that read this haven’t watched a minute of the show… yet. First, let me make clear that the production quality and overall presentation of Wrestle Kingdom 9 is on par with (and, in my opinion, far surpasses) most large shows that occur in America, such that say WWE or TNA would put on, to compare. Wrestle Kingdom Tokyo Dome shows are a constant yearly spectacle, plain and simple. Many fans consider the once-a-year event to be the “Wrestlemania of Wrestling”, or in other words, the show to top all shows among the wrestling world. This past event didn’t disappoint. Great and grandiose entrances, a great stage setup, a ramp to show off the stars, awesome lights, lasers and pyrotechnics were all aplenty. The show feels as big as it looks before each and every match even begins. You feel like you’re watching something important and worth watching. This big-feel element is widely lacking state-side. A pay-per-view or equal special event should be worth going out of your way to watch. I promise you, I found Wrestle Kingdom to be.

Okay, so commonly, the language barrier and foreign commentary to match in the Japanese product is considered by most American wrestling fans to be a large turn off. Well, rather smartly knowing this to be the case, New Japan Pro Wrestling partnered up with the newly-formed Global Force Wrestling (formed by Jeff Jarrett) to present Wrestle Kingdom 9 with full English commentary. Provided by none other than the WWE Hall Of Fame voice of Jim Ross and the current, knowledge-rich Lucha Underground commentator Matt Striker, the two really help to bring the show to life internationally.  Yeah, you read that right. FULL ENGLISH COMMENTARY. The English commentary provided an insightful, entertaining, refreshing and a guiding light to the event over the course of its entirety. Ross and Striker brought the event to a worldwide audience in a clear and passionate fashion. I mean, with the return of Jim Ross at the table, can one really go wrong anyway? I don’t think so. So, for Wrestle Kingdom 9, forget the language barrier! Thanks, Jeff Jarrett and Global Force Wrestling, you can look forward to Ross and Striker doing what they do best while you watch the action unfold!

For those who shy away from Japanese events strictly due to length, worry no more. Though Wrestle Kingdom 9 was the typical Japanese run time of three hours, every second will grab your attention. Besides, if you are able to sit through a WWE special event or Monday Night Raw every Monday, I don’t want to hear any complaints! I barely look at the television when a three hour Raw is on. Wrestle Kingdom 9 had me and a friend of mine absolutely glued. So, in order to give the show a fair shake, sit down, load up the event by whatever means you deem appropriate, and start watching around seven or eight in the evening (or when you’d normally sit to watch a professional wrestling program). Even make an event out of it with other wrestling friends that may not be familiar with puroresu either! Experiencing the show together may even sweeten the experience. With that said, try and refrain from too many electronic or cellular distractions and just watch the show unfold in order, uninterrupted. I bet three hours will fly by and Monday night snore sessions will be a distant memory. Kick back with a few buddies and enjoy. 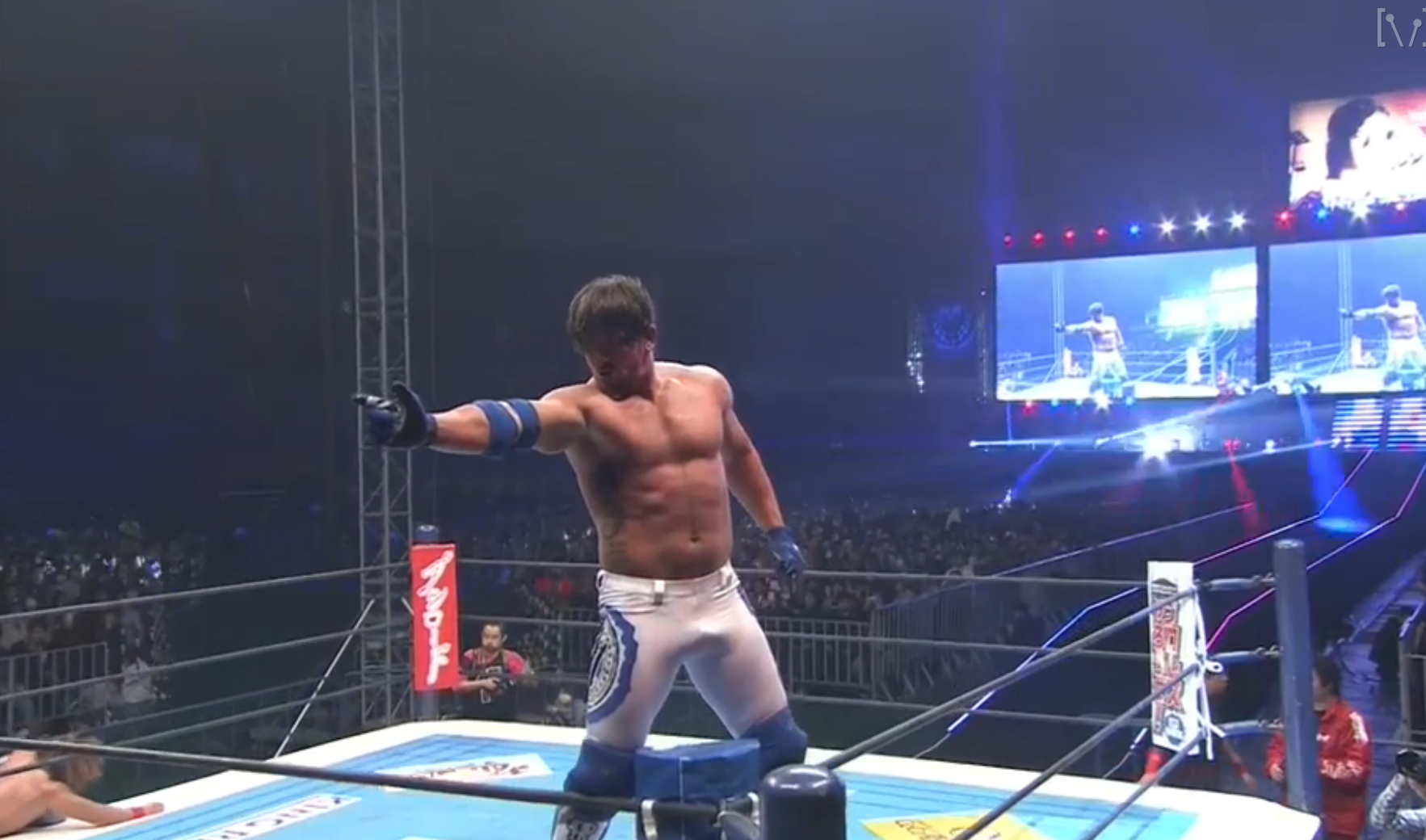 I’ll also promise you ahead of time that you’ll recognize most of the American talent that appears on Wrestle Kingdom 9’s card. So, there is that to look forward to right off the bat. Stars from WWE, TNA, ROH and Pro Wrestling NOAH all have a place in the event. Recognizable names like AJ Styles, The Young Bucks, Shelton Benjamin, Alex Shelley, and many more will dazzle and impress as they light up whatever screen you decide to watch from. After all, in Japan, American wrestlers are able to fully flex their prowess and ability. Taking fully advantage of the creative breathing room to paint some masterpieces only further amplify well tested and consistent workers. A few familiar faces will help you make a smoother transition over the pond to the land of the rising sun. So, if nothing else, Wrestle Kingdom will allow you to witness American stars shine to the brightest of their ability on a big stage!

What really seals the deal, though? What makes this show a MUST NOT MISS? Simply, match quality. I can honestly say that the match card was stacked from top to bottom in delivery. Each match revved up the excitement for the match that followed it, so the show would end with a stellar main event, one that left me on the edge of my seat. While watching, I was genuinely enjoying the entire show. While watching current American offerings, I haven’t even been close to being able to make that kind of claim. I’d thoughtlessly put any match on that card up against any WWE main event, and I say that in all seriousness. The show was mind blowing and the matches made a special night an equally unforgettable one. Watch Wrestle Kingdom 9 for the match quality alone. Watch for the rough flashiness and the stiff athleticism. The passion and excitement is so visibly apparent through the performance of each wrestler that it just made me see the current-day WWE product in such a dim, plastic way. NJPW’s wrestlers presented themselves with such heart and desire, I was roped into the drama of each and every match. Again, rarely does American wrestling do something like that for me these days.

All things considered, I still firmly stand by my belief of Wrestle Kingdom 9 to be the strongest, most entertaining professional wrestling event I’ve seen in a decade (maybe more), bar none. The crisp production, welcomed variety, English commentary, action-packed duration, familiar faces, and overall match quality all melted into one masterpiece in the form of the January fourth Tokyo Dome show this year. I ask you to allow Wrestle Kingdom 9 to restore and revive your passion for the sport and drama of really, really enjoyable professional wrestling. As big American events continue to disappoint many fans, they begin to distance themselves farther and farther from the product. I barely consider myself a fan of the televised American wrestling scene these days. Since watching Wrestle Kingdom 9 and staying up-to-date with New Japan events and watching their shows, American wrestling programming feels like a cheap substitute. Watching American wrestling and the specifically the WWE currently for many fans, from what I’ve witnessed, has become akin to eating something really unsatisfying for years, just because you can understand the wrapping it’s delivered in. It’s routine and not even fun anymore. It is up to you to feed on something worth your time. If you’re hungry for a unique and truly satisfying dish of true professional wrestling action, look past the foreign wrapper of New Japan Pro Wrestling and sink your teeth into this show. You’ll thank me later.

Now go. Right now. Find this show and watch it immediately. After that, come back here an let me know what you thought! If you hate it, feel free to send me hate email. I doubt I’ll get one.