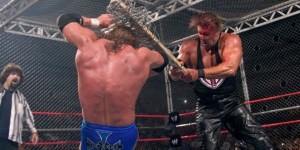 Triple H and Kevin Nash have been friends dating back to 1995 when Triple H first made his debut in the company as the rich snob Hunter Hearst Helmsley. By 1996, Kevin Nash and Scott Hall had jumped ship to WCW. By 1999, Triple H won his first WWF World Championship while Nash won his first WCW World Championship by the end of 1998. By 2001, Triple H was out with injury and Kevin Nash was out of a job due to WCW going out of business.

By 2003, Triple H was the top heel on the RAW brand holding the WWE World Heavyweight championship, which he had defeated Shawn Michaels to regain in December 2002. Kevin Nash had just made his return to the WWE on April 7th when he saved Shawn Michaels and Booker T from a post match beating from Triple H and his Evolution buddies.

When Kevin Nash returned both Triple H and Shawn Michaels figured they would be able to get their friend to align with them. Nash wanted everyone to be together, but that just wasn’t going to happen. There was tension between all three men, but on April 21st, the decision was made for Nash when Triple H delivered a low blow from behind to escape the ring following a title match with Booker T.

Triple H teamed with Chris Jericho and Ric Flair at WWE Backlash 2003 to defeat Kevin Nash, Shawn Michaels and Booker T when HHH hit Nash with a sledgehammer. If Triple H thought that would be the end of the feud, he was mistaken. The following night on RAW, Kevin Nash chased Triple H from a tag team title match with a sledgehammer costing HHH and Ric Flair a shot at the titles. Triple H managed to escape only when he jumped into a limo.

The next week on RAW, Kevin Nash appeared on the Highlight Reel where he was attacked by Jericho and double teamed along with Triple H. Nash fought them both off and brawled with HHH outside the arena until HHH stole someones SUV to escape the onslaught. Nash would get his first WWE World Championship match since April 1996 at Judgement Day 2003.

At the pay per view, Nash destroyed HHH for seven minutes but was unable to win the match when HHH got himself disqualified. HHH nailed Nash with a sledgehammer to escape the match with his championship. However, Nash was left standing tall when he put HHH through the announcers table with a power bomb. This feud wasn’t quite over with.

The night after Judgement Day, it was announced that Nash would get another shot at Triple H but the match would happen inside Hell In A Cell to prevent any interference from happening. On the May 26th edition of RAW, Nash saved Michaels from a beating by HHH and Flair when Flair turned on Michaels, but Nash was attacked by a masked man with a chair, who ended up being Randy Orton. After losing a six man tag match on June 2nd, Nash attacked all of Evolution.

With their match taking place inside Hell In A Cell, none of the contracted referees wanted to officiate the match due to past experiences involving Tim White who had gotten hurt at Judgment Day 2002. Thus, Mick Foley was inserted as the special referee for the match. Foley, as most people know, had many memorable moments inside the structure and would be able to hold his own in the cell.

At Badd Blood 2003, HHH and Nash used several different kind of weapons and HHH was left a bloody mess. Luckily for HHH, he was able to walk out as the champion when he pinned Nash following the Pedigree. The three month feud comes to an end and Nash would remain in the upper midcard for the remainder of his WWE run in 2003.

I remember enjoying their Hell In A Cell match more than most fans did. Nash was a believable threat to HHH’s title and they had some decent chemistry. The feud didn’t go too long and ended at the right time. Nash was kept relatively strong, which isn’t a surprise since he’s friends with HHH. I might be in the minority for enjoying the feud.

What are your memories of this feud?

From: Uncategorized
← Would You Go To This Show? Volume Twenty
WWF Metal 2000: The Forgotten Show Part Three →
No comments yet