A Night At The Matches: WWE vs. 2CW

Last night, I attended two wrestling shows with a few friends of mine. The first show was a World Wrestling Entertainment house show at the War Memorial in Syracuse, New York, which started at 5pm. The second event was a show put on by a local company, Squared Circle Wrestling (2CW), which took place at 8pm. I thought it would be interesting to compare to the two shows since in recent months there has been a “us vs. them” mentality from independent companies towards the WWE.

For those unaware about 2CW, they are based out of Syracuse and have ran most of their shows in the Upstate New York area since 2006. They have used plenty of top names and have a pretty good local talent including guys like Colin Delaney, Jay Freddie, Sean Carr, Brute Van Slyke, Kevin Graham and Nick Ando.

We got to the War Memorial just before 5pm and the show started right at 5pm, which the WWE has mastered with getting their show going as advertised. There were plenty of seats available with maybe 65-70% of the arena full. Syracuse is usually a good draw for WWE, but the last two house shows haven’t had strong attendance.

The opener for the show was a triple threat tag team match for the WWE World Tag Team Championships with the New Day, Xavier and Kofi, retaining their titles over the Primetime Players and the Dudley Boys. New Day is over to the point where they might as well actually be babyfaces, which they didn’t get over as while doing the same gimmick. The Dudley Boys got a much bigger pop than I was expecting. It was a solid opener with the New Day being the best part of the whole match. Kofi got the win with a rollup on Bubba. After the match, the Dudley Boys put Xavier Woods through a table with a 3D.

Los Matadores taking on Curtis Axel and Damien Sandow was the next bout. It seemed as if fans forgot that Matadores had turned heel and when El Torito didn’t come out during the entrance it seemingly clicked with everyone in attendance that they should be booing and they switched to booing. The match felt like filler and served zero purpose. It didn’t hold anyone’s attention in my group. Axel and Sandow won the bout when El Torito, who got a really big pop, came out and cost his former buddies the match by attacking them. 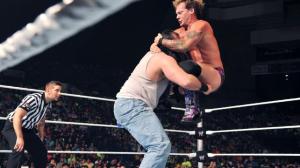 Luke Harper came out and issued an open challenge to anyone. The challenge was answered by Chris Jericho. I really enjoyed the contest and thought they worked rather well with each other. Harper is incredible underrated and could be a bigger star for WWE if given the chance. Harper is a guy who was a 2CW regular before his WWE signing and he is capable of being a great baby face if that is a direction the WWE ever decides going in. Jericho won with the Codebreaker, but it was an energetic and fun match.

WWE Intercontinental Champion Kevin Owens defended against former champion Ryback. It’s a far cry from Owens matches against Cena a few months ago, but I suppose it wasn’t awful or anything. Owens got himself disqualified and was taken out by the Shell Shock to put Ryback over after the match.

WWE Divas Champion Charlotte & Becky Lynch were victorious over the Bella Twins. I know everyone is going wild over the Divas Revolution, but I’m just not into it at all. Charlotte got the submission victory over Nikki in the middle of the ring with the Figure Eight.

Big Show and Cesaro were up next. Cesaro is such a great talent and has connected with the fans despite Vince McMahon thinking otherwise. Show got the pin fall victory over Cesaro following a choke slam. It’s 2015… Show should be elevating talent instead of going over on them.

The main event was WWE World Champion Seth Rollins taking on WWE United States Champion John Cena with the US Championship on the line. The match was identical to their recent match on RAW. Sure, it was a good match, but you could call the spots as the match was going along, so that was a bummer.

The show was much better than their last time in Syracuse which was a dreadful match. This time around there was some fun action, but far too predictable which is to be expected on a house show.

The ended just before 7:30pm so we were able to head over to the Pastime Athletic Club for the 2CW show with time to spare. The show was advertised to begin at 8pm, but the show didn’t start until 8:15pm. For several weeks it was promoted as starting with a thirty minute Ironman match between AR Fox and Colin Delaney. That wasn’t the case.

Instead, the show started with Michael Christopher issuing an open challenge. Christopher had previously been known as Guy Sunshine who was a portrayed flamboyant homosexual character. He largely competed against Jasper Whipple, a tiny nerd, and Isys Ephex. He had yet to have a good match or anything of entertainment value. So, it was an absolute shock when he eventually made 2CW Champion Nick Ando submit and won the championship. There was a big “what the fuck” chant and it didn’t come across like fans bought it at all. I know the intent was shock value, but this just didn’t work to me at all. 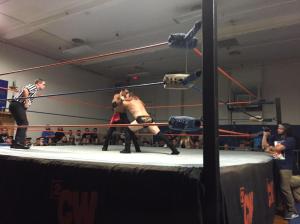 Delaney and Fox went on second and after a slow start it was exactly what everyone was expecting. These guys have had four great matches, though their match in Rome, NY back in May was probably better. The match ended in a draw at one fall a piece. After the match, they agreed to a have no time limit, no disqualification and falls count anywhere to put an end to their series of matches. One of the major companies need to sign Colin Delaney, by the way. Everyone knows how great AR Fox is, but Delaney needs to be seen on national television, again.

Jessica Havok and Dick Justice on a mixed tag team match against Pepper Parks and Veda Scott. Scott replaced Cherry Bomb who suffered a broken collarbone and couldn’t compete. There wasn’t much going on here. Scott essentially turned on Parks by not wanting to get involved but was eventually forced in by Pepper and was defeated upon entrance late in the match.

In a rematch from the July Oswego show, Mike Bailey got the win over Cheech with a rollup and a handful of tights, which Cheech did to win in their first match. I thought it was a better match than their Oswego match with Bailey getting over with the Syracuse crowd with his entertaining kicks and overall offense. Cheech continues to be a great heel.

A seven man scramble match was next up. This was due to Jay Freddie not being able to compete due to personal reasons and Biff Busick not being able to compete since he is reporting to WWE. So, they just put everyone in a scramble match. The match featured the Devil’s Reject, whom I have never heard of, Benjamin Boone, Slyck Wagner Brown, Jason Axe, Ted Goodz, Sean Carr and Isys Ephex. Recently, Ephex has been doing a Weekend at Bernie’s kind of gimmick and that was the case here. He sitting in the front row “knocked out” and once some music hit he woke up and cleaned house until the music stopped and Boone got the victory.

The mandatory Pete D. Order & EMT taking on Guero Loco and Steve McKenzie was next. Luckily the feud that will never end only lasted thirty-seconds as Bin Hamin hit EMT with a flag on accident and the good guys got the win. I don’t get the point of these guys on the show.

A three way dance between Joe Gacy, Brute Van Slyke and Moose is next. Moose played football for Syracuse and thus was really over with the crowd. The match seemed to be pretty quick and I wasn’t all that entertained by Moose or any of the three. Moose got a “please come back” chant, but I couldn’t care less if he came back or not.

Originally, the main event was supposed to be the 2CW Tag Team Champions the Young Bucks defending against Eddie Edwards and Roderick Strong. However, Nick Jackson wasn’t able to compete due to his wife having a child. So, instead, Roderick Strong turned on Edwards and joined Jackson, a fellow member of Mt. Rushmore 2.0 in PWG. Edwards was beaten down a little but until Mike Bailey came out and teamed with Edwards. This was by far the best match on the card and Bailey took a beating that made him a star in many peoples eyes. This was just an incredible display of wrestling and was a great way to end two shows of wrestling. By the way, Adam Cole from ROH was seen in the crowd, but was undetected from the audience.

The 2CW show was easily the better of the two. WWE has a formula and they aren’t going away from that. At 2CW there was quality action with Fox/Delaney and the tag main event worth a view if the matches were to be released on YouTube or if you like DVDs and/or MP4 this will likely be released through Smart Mark Video in the next few weeks/months.

For more information on Squared Circle Wrestling, go to www.2cwwrestling.com