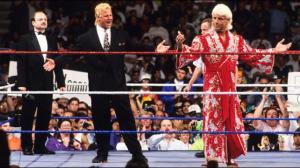 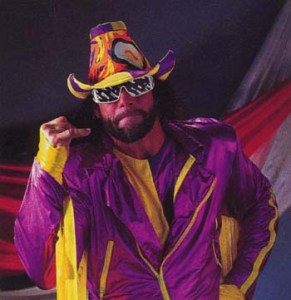 Shortly after the Royal Rumble, “Macho Man” Randy Savage became the next challenger to the WWF World Championship. Flair had his executive consultant (fancy wording for manager) in Mr. Perfect and Bobby Heenan was also associated with the duo. Flair made the feud with Savage to be very personal involving Elizabeth. Flair claimed to have been Elizabeth’s lover prior to her relationship with Savage and had some doctored pictures. It really became a heated angle leading into WrestleMania VIII. 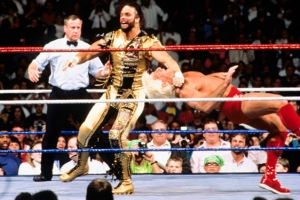 At WrestleMania VIII, Savage would defeat a bloodied Ric Flair with a rollup, though Heenan claims there was a handful of tights and he actually has a point there. Anyway, Savage regained the gold and fought for his wife. Flair, Perfect and Heenan weren’t thrilled at all.

Over the course of the next three months, Savage would regularly defend the WWF World Championship against Ric Flair on the house show circuit and would walk out as champion each time out. The amount of losses had to have gotten to the trio and something had to change in order for them to win the championship. 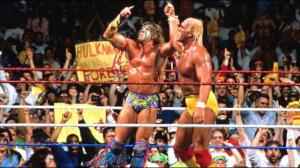 At WrestleMania VIII the Ultimate Warrior made his return to the WWF making his first appearance since SummerSlam 1991. At the show, Warrior arrived and saved Hulk Hogan from a beating at the hands of Sid Justice and Papa Shango. For the next few months, Warrior was involved in a goofy feud with Papa Shango, which he eventually won.

It didn’t take long for Warrior to find himself as the top contender to the WWF World Championship held by Randy Savage. They had a memorable feud in 1991 that culminated in a retirement match at WrestleMania VII, which Warrior won and Savage didn’t wrestle for eight months. From that battle, they had grown to respect each other. 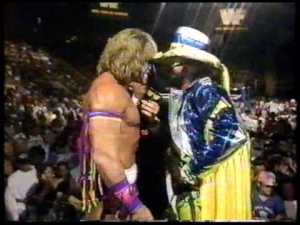 They had a confrontation on the July 25th edition of WWF Superstars where Warrior said that Savage was good, but not the best. He wanted the gold back around his waist. Former WWF World Champion Ric Flair and Mr. Perfect got involved in the segment where Flair made it known that he was annoyed with being pushed aside so that Warrior could get a championship match. After some taunting, Randy Savage ran into the ring and was attacked by both Flair and Perfect. Don’t worry, Warrior eventually ran into the ring and made the save. However, when Warrior gave the belt back to Savage, they weren’t very friendly about it.

On the August 8th edition of WWF Superstars, the Ultimate Warrior was interviewed by Gene Okerlund regarding his match with WWF World Champion Randy Savage at SummerSlam 1992. Ric Flair ended up coming out and told Warrior three important things.

1.) Flair was going to be the WWF World Champion by SummerSlam
2.) Flair will be at SummerSlam to ensure the winner of Savage/Warrior will get a title shot
3.) Savage had been in contact with Mr. Perfect to be his manager for the show

Upon hearing that Savage was talking with the heels to be his manager, Warrior said that he’d do anything and pay any price it took to be the WWF World Champion. When Randy Savage was interviewed on the August 15th edition of WWF Superstars, he refused to confirm or deny that he had been talking to Perfect. Mr. Perfect told Savage that his price was going sky-high because the man he would manage that night would walkout as the WWF World Champion.

With so much tension between them, WWF World Champion Randy Savage and the Ultimate Warrior teamed up for a tag team match against the Nasty Boys for the 1992 SummerSlam Spectacular special on the USA Network. Throughout the match, it was evident that they didn’t really trust each other. At one point, Brian Knobbs attacked Warrior from behind and he collided with Savage on the apron. Naturally, Savage thought Warrior was attacking him. Anyway, Ric Flair and Mr. Perfect ended up coming out and attacking Warrior.

Afterward, Warrior was interviewed and believes that this proved that Savage had made a deal and paid off Perfect and Flair for SummerSlam. Thus, rage and fury will be coming his way at SummerSlam. Savage would also be interviewed and he finally denied that Perfect would be in his corner. Savage thinks that it was a setup to trick the fans and that Warrior can’t hang with him and he’s going to take shortcuts to win the championship.

So, whose corner would Mr. Perfect be in at SummerSlam 1992? Well, both. It was proven to be all a ruse as Perfect and Flair ended up coming out and attacking both Savage and Warrior. They severely damaged the left knee of Savage after Macho Man came off the top rope to hit Flair with a double axe handle but was instead met with a chair shot to the leg. After all the controversy, Warrior won the match by count-out. 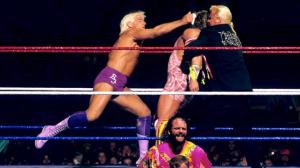 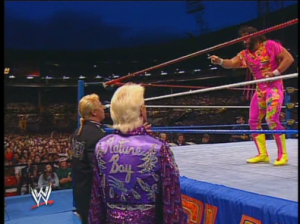 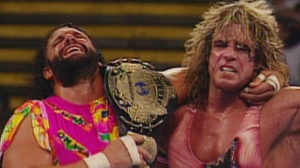 It was the Perfect Plan. Warrior doesn’t win the championship and Savage is badly weakened prior to a rematch with Flair since he never got a televised rematch. Sure enough, on the September 14th edition of Prime Time Wrestling, Flair would regain the WWF World Championship after Savage passed out to the figure four. Razor Ramon had gotten involved in the match and would soon feud with Savage afterward.

As for Ric Flair he would be the WWF World Champion for about a month until he lost the belt to Bret Hart, who would be the face of the New Generation. Shortly after that match, Flair and Perfect would split when Savage ended up recruiting Perfect to be his tag team partner for a match at Survivor Series 1992. Originally, Savage was going to team with the Ultimate Warrior to take on Ric Flair and Razor Ramon, but Warrior got busted with steroids and was fired. 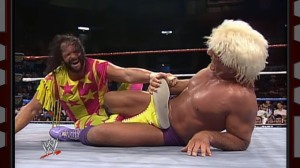 The Perfect Plan storyline added a lot of interest and drama into a WWF World Championship match that already had a lot of hype behind it. Mr. Perfect and Ric Flair played their heel roles very well and came out looking brilliant, which doesn’t happen all the time for heels. Flair got the belt back and it proved to be the best plan for them. This a storyline that I enjoyed a great deal.

What are your memories of this storyline? Leave your thoughts!