Being The ‘Marty Jannetty’ Of A Tag Team Part II

Back in January, I wrote an article talking about how often times a tag team will have a ‘Marty Jannetty’ of the team. For those who don’t get the reference, it dates back to the early 1990s when Jannetty and Shawn Michaels broke up after being the Rockers for several years and Shawn Michaels went on to have incredible success while Jannetty was seemingly forgotten about. The interesting part of it is that Jannetty was a good wrestler but had demons in his life (drugs, alcohol) that prevented him from having any substantial singles career highlights.

I decided to take a look at five more tag teams that fall into the same category where one person in the tag team goes on to have success while the other ends up fizzling out or just doesn’t connect with the fans in a singles role.

A prime example of this is the Hart Foundation. The team consisted of Bret Hart and Jim Neidhart. The team wrestled together from 1985-1991 and won the WWF World Tag Team Championships twice. The team was hated and popular towards the end of their run. After losing the tag titles at WrestleMania VII in 1991, Bret Hart quickly went on his own leaving Neidhart in the dust. Within five months, Bret was the WWF Intercontinental Champion defeating Mr. Perfect in a great match at SummerSlam and would win the WWF World Championship in October 1992 defeating Ric Flair. In total, Bret would win the WWF World Championship five times from 1992 through 1997. Jim Neidhart would never win a singles championship and after the split wouldn’t remain in the WWF for a long period of time due to his inability to stay out of trouble. Nonetheless, it was evident that Neidhart wasn’t exactly a great wrestler and wasn’t heavily pushed on his own. 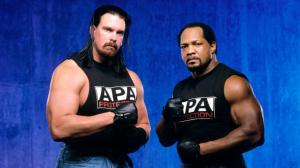 Before forming a tag team with Bradshaw, Ron Simmons was an accomplished football player and won the WCW World Championship in 1992, which he held from August to December. They formed the tag team known as the Acolytes and were the muscle for the Ministry in 1999. They won the WWF World Tag Team Championships on three different occasions. It became evident that the WWF saw more in Bradshaw during their run and when the team was split due to the 2002 WWE Draft, Bradshaw accomplished far more in a singles role than Simmons did on Smackdown during the same time. Bradshaw was booked as a friend to Steve Austin while Simmons was working with D-Von Dudley in a pastor gimmick. They reformed in 2003, but by the summer of 2004, Bradshaw ditched Simmons and would win the WWE Championship from Eddie Guerrero at the Great American Bash 2004. Bradshaw was given the John Bradshaw Layfield gimmick and was the top heel for Smackdown for a year. Simmons didn’t have a substantial singles run following the teams formation. Simmons most successful period of time in the WWF was when he was a tag team with Bradshaw.

One of the more obvious examples of one guy being seen as the star of the tag team involves the Dudley Boys, which consisted of Bubba Dudley and D-Von Dudley. As a team, they were incredibly entertaining and provided a spark to the WWF tag team division upon their debut in 1999. They were one of the hottest acts in ECW history and often times almost caused a riot to take place. Similar to the APA split, Bubba achieved success on RAW and was getting quite a warm reception from the WWF fans. By the end of 2002 they reformed and continued to team together. They’d go to TNA and have a successful run for several years. By 2010, Bubba was repackaged as Bully Ray as he turned on D-Von and was presented as the top heel in TNA while D-Von was stuck in the lower mid card of the company. Bully would win the TNA World Championship two times while D-Von had a run with the forgotten about TNA Television Championship. Currently, Bully is a highly sought after talent who is rumored to be either going to NXT/WWE or if the price is right, back to TNA. There hasn’t been much of a buzz regarding D-Von Dudley and what he is up to.

Perry Saturn and John Kronus became one of the most popular ECW tag teams in the history of the company. They won the ECW World Tag Team Championships on three occasions. Saturn left ECW and went onto WCW where he was heavily featured and by 1999 was part of the group that would soon be known as the Radicals in the WWF. As for John Kronus, he lasted in ECW until around 1999 when he left and joined the company XPW, which may not have been the best career move. This may be the best example of ECW tag teams where one guy went on to have plenty of success and the other just never found their niche.

By the end of 1995 World Championship Wrestling formed a tag team of Marcus Alexander Bagwell and Scotty Riggs known as the American Males. They were two good looking guys who didn’t connect well with the fans but were able to win the WCW World Tag Team Championships though their reign wasn’t a long one. They would split by the end of 1996 as Bagwell became a heel and joined the New World Order. It was at that point that he would adapt the personality he would have to this day as Buff Bagwell. Bagwell was able to get plenty of heel heat but also in 1999/2000 played the baby face role very well. Riggs struggled to get any traction as he was part of the Flock led by Raven and would get a Narcissist type of gimmick in 1999, but wasn’t pushed. Riggs had a brief run in ECW where he was associated with the heel stable the Network, but would leave ECW after a few months. Bagwell didn’t have much success after WCW closed their doors, but his career went in a far better direction than Riggs had from 1997-2000.

Do you agree with the examples provided here? What are some other tag teams that had a ‘Marty Jannetty’ in them? Leave your thoughts below.