The Rise And Fall Of Ahmed Johnson

With the departure of Hulk Hogan and Randy Savage from the WWF in 1994, the World Wrestling Federation was desperately looking for their next high profile superstar. They relied on Bret Hart starting in October ’92 and had success overseas with him as champion. There was a failed attempt in making Lex Luger the next Hulk Hogan that started in the summer of ’93 and lasted until the fall of ’95 when Luger returned to WCW.

By the fall of ’95, the WWF was relying on Bret Hart, Shawn Michaels and the Undertaker to bring in fans. They were all established wrestlers that had been in the company for five plus years. They needed some fresher names, some younger talent.

October 30th, 1995 on RAW, Ahmed Johnson made his WWF television debut when he saved Razor Ramon from an attack by Camp Cornette. During the segment, Ahmed showcased his strength managing to power slam Yokozuna. Ahmed’s feat of strength quickly brought attention to the new superstar and his association with a name like Razor Ramon catapulted him up the card. Outside of the WWF, Ahmed won the USWA Heavyweight Championship from Jerry Lawler on November 6th.

Ahmed teamed with Shawn Michaels, Davey Boy Smith and Psycho Sid to win a Survivor Series match against WWF Intercontinental Champion Razor Ramon, Owen Hart, Dean Douglas and Yokozuna. He would begin is first feud at In Your House V on December 17th, when after a victory over Buddy Landell, Jeff Jarrett made his surprise return and attacked Johnson with a plaque during an interview segment. Ahmed would defeat Jarrett at the Royal Rumble by disqualification.

Following the event, Ahmed would mostly wrestle against Tatanka on the house show circuit and was associated with Jake Roberts and Yokozuna in a feud against the Camp Cornette stable. There would be a six man tag match at WrestleManai XII, with Ahmed’s team coming out on the losing end. The following month at WWF In Your House: Good Friends…Better Enemies, Ahmed teamed with Jake Roberts in a losing effort against Davey Boy Smith and Owen Hart when Roberts submitted.

During this entire time, Ahmed had yet to lose a match. Johnson would finally lose to Vader on May 27th edition of RAW in a King of the Ring qualifying match. Following the loss, Ahmed would feud with WWF Intercontinental Champion Goldust after Goldust performed CPR, which Ahmed didn’t appreciate. They’d battle at the King of the Ring, where Ahmed would win his first and only championship.

For myself, this was the point where I was really becoming a huge Ahmed Johnson fan, at the time. His intense personality and look were his best features and the Pearl River Plunge was a cool finishing move, at least that’s what I thought. It seemed like this was a time where Johnson was being groomed for a run at the top, but sadly this was gong to be the highest he’d reach.

Johnson would compete in a six man tag main event at In Your House: International Incident where he teamed with WWF World Champion Shawn Michaels and Psycho Sid in a losing effort against Camp Cornette. Michaels was pinned by Vader to setup their SummerSlam match. The moment that would likely drastically change Ahmed’s career took place on the July 22nd edition of RAW when Faarooq made his surprise debut and attacked Johnson nearly causing Ahmed to have his career shortened due to a kidney injury thanks to the attack. The attack would cause Ahmed to vacant the WWF Intercontinental Championship. 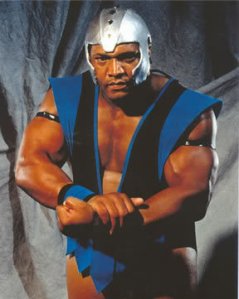 It was especially awful timing since Ahmed had won a battle royal to become the number one contender to the WWF World Championship after winning a battle royal on RAW. Ahmed would be out for the rest of the year recovering from the injury, but it was clear through interviews that he was going to get revenge on Faarooq.

Ahmed would make his triumphant return at the Royal Rumble where he would get his hands on Faarooq. Johnson got some level of revenge managing to win by disqualification. This would be the beginning of a lengthy year where Ahmed continually feuded with Faarooq and the Nation of Domination.

They’d meet at WrestleMania XIII where Ahmed teamed with the Legion of Doom to get a victory over the Nation in a Chicago street fight. Following the event, Ahmed would attempt to disband the group at the May In Your House, but was unsuccessful. Ahmed managed to qualify for the 1997 King of the Ring, but would fail to advance past the quarterfinals.

After nearly a year of fighting the Nation, Ahmed joined the group on the June 16th edition of RAW turning on WWF World Champion the Undertaker in the process. Ahmed was scheduled to fight Taker at Canadian Stampede in July, but was replaced by Vader due to injuries. Ahmed would miss nearly two months of action before returning.

Ahmed returned on the August 4th edition of RAW winning a singles match against Chainz, but was promptly attacked by the Nation for reasons that were unknown. Ahmed joined the group for about a month and a half, had two matches a member of the group due to injury, and was kicked out of the group leading to a continuation of the feud. His stock is rapidly declining at this point. 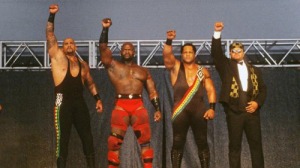 If you can’t beat them, join them.

Johnson would make his next pay per view appearance teaming with LOD and Ken Shamrock to defeat the Nation at the Survivor Series pay per view. Ahmed lasted all of six minutes before being eliminated by The Rock. Ahmed would remain in the mid card role before his departure in February 1998. The rumor was that he didn’t want to sell for Chyna, a female wrestler.

Ahmed wouldn’t be seen for nearly two years until he signed with World Championship Wrestling. However, upon his appearance it was evident that Ahmed wasn’t nearly the same wrestler he once was. There was no longer the incredible body and the intensity wasn’t there, either. Ahmed, going by the name of Big T, was overweight, slow and not overly motivated. He was released in the spring of 2000 due to his weight issues. He wouldn’t compete for a national wrestling company again.

The major problem for Ahmed was his inability to stay healthy. Whenever he got a shot to seemingly become a main event guy, he was sidelined by injury and that makes it extremely difficult to be confident in someone when you’re not sure if he’ll be okay the next week. I think Ahmed had full of potential but it’s entirely possible that the rise of Steve Austin would have kept him from being a top baby face champion. I’d be interested to see what Ahmed vs. Michaels, Ahmed vs. Austin and Ahmed vs. Bret Hart would have accomplished. Of the three, I think Michaels would have made Ahmed look like a star.