Cabana’s Curse In Chicago Part One 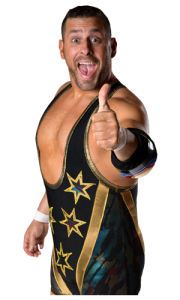 Colt Cabana first got his start in Ring of Honor in 2002. It didn’t take long for his personality to shine and he proved that he could hang in the ring with some of the best wrestlers in the world. He was the ideal mix of wrestler. Sure, he could be a comedy wrestler, but he delivered in the ring and has had some memorable serious feuds in ROH. It would take a couple of years before he’d earn a ROH World Championship match.

In fact, his first ROH World Championship match took place on July 24th, 2004 in Chicago. Actually, all of his title matches have taken place in Chicago. There’s a trend here. A lot of times when ROH held a show in Chicago, Cabana would be involved in a major match. More times than not, it was a for title. From 2004 to 2016, Cabana has had six title matches in Chicago, his hometown. However, each time, he hasn’t been able to capture the gold.

It’s as if Cabana is cursed in his hometown from winning the ROH World Championship. This will be a six part series looking at each of his title matches. As noted above, his first title opportunity came on July 24th, 2004. The ROH World Champion is Samoa Joe. There’s a little bit of a story behind the match.

At the time, Samoa Joe was a dominating champion and was going through the ROH roster. He would lose a few non-title matches or matches where the championship wasn’t on the line. Joe lost to Cabana at ROH Survival of the Fittest when Cabana won the match with a rollup. Actually, Joe had lost a few matches to a rollup. So, the story was that Joe was vulnerable to lose a match if someone could perfectly execute a rollup. Such a simple move getting an angle in ROH circa 2004. It’s kind of remarkable, honestly.

Thus, Cabana had been built up as a guy who could execute the move very well. Leading into the showdown with Joe, Cabana won several matches with a rollup including a match against Trent Acid and won the second fall of a 2/3 falls match the night prior to this title defense. It’s likely that a major story for the match will be an inside cradle. This is a match I’ve never watched. Lets see how it goes.

Cabana gets a great ovation for his ring introduction, so it’s clear that he’s over big time in Chicago. That explains his title shot here. Cabana throws a streamer into the air before they lockup or anything. Joe backs Cabana into the corner but slowly backs away for a clean break. Cabana backs Joe into a corner and does a high five before backing away. Joe puts a headlock on Cabana, but Colt is able to counter into one of his own for a moment. Joe breaks free from the hold with a roll through. Joe forearms Cabana, but Colt gets right in his face. Colt comes off the ropes with a shoulder block but Joe doesn’t budge. Joe pie faces Cabana to seemingly annoy the challenger. Colt finally knocks Joe down with a shoulder block after ducking a clothesline. Colt works over Joe in the corner with strikes. Cabana misses a leaping butt strike and is knocked to the floor by Joe. Joe lets Cabana back into the ring and they do a test of strength with Joe getting control keeping Colt down to the mat.

Colt gets up and attempts a double knee strike in the corner but Joe counters with a clothesline. Joe slaps the back of Cabana but Colt goes for a rollup for a two count. Colt acts like he wants to tag in CM Punk, but it’s not a tag match. Joe works over Cabana with a series of strikes in the corner. Joe boot scrapes Cabana and hits a running boot sending Colt to the floor. Colt shoulder rams Joe from the apron and is met with a knee on the apron. Joe slaps the back of Cabana a few times as Colt tries to go to the top rope. Joe pummels Cabana with several slaps and Colt is laying across the top rope. Joe drives Cabana down with a back suplex for a two count. Joe controls Cabana with a chin lock. Cabana gets up and is tripped back to the canvas. Joe puts a half Boston crab on Cabana but can’t get a submission as Colt gets to the ropes.

Joe kicks and slaps Cabana in the corner. Joe chops Cabana but Colt comes back with jabs. Joe avoids a clothesline with a full nelson but Cabana breaks free. Colt avoids Joe in the corner and hits a jumping double knee in the corner. Colt slams Joe and hoes to the top but Joe shoves Colt off the top and Cabana crashes to the floor and rolls up the entrance way.

On the floor, Joe is casually kicking Cabana in the head and delivers a few kicks to the chest. Joe sends Cabana hard into the guard railing and has a steel chair. Joe sets up for a running boot strike into the railing. Cabana blocks it and hits Joe with the chair. Cabana hammers away on Joe and has the champ sitting in the chair. Cabana delivers a running boot strike sending Joe’s head into the guard railing! Cabana rolls Joe into the ring where Joe plants Cabana with a snap power slam for a two count. Joe comes off the ropes with a clothesline for a two count. Joe runs into an elbow in the corner and Cabana plants Joe with a scoop slam. Cabana heads to the top rope and misses a frog splash. Cabana takes Joe over with a back suplex for a two count. Colt goes back to the top rope and hits the frog splash for a two count!

Cabana comes off the ropes but is dumped to the apron. Cabana goes for a sunset flip, but Joe easily gets out. Cabana locks in the STF and is trying for a submission but Joe is able to reach the ropes to break the hold. Colt signals for the Colt 45, but Joe is able to avoid it with slaps and a kick to the head. Joe puts a choke on Cabana but Cabana goes to the mat and nearly wins with a rollup. Joe nails Cabana with a lariat for a two count. Joe continues to work over Colt before running into a boot in the corner. Joe stops Colt with a forearm in the corner and hits the Muscle Buster for the win. (**3/4)

For his first challenge, Cabana wasn’t made out to look like a serious threat to Joe. He had a few moments of hope to win the title, but he didn’t have a lot of impactful moves. The crowd being heavily behind him was a positive for the match since I don’t think the crowd atmosphere would have been nearly as good had the show taken place anywhere else. Cabana played the underdog role well and put forth a good effort in his first championship attempt. I’m curious to see how he improved in these kind of matches as this series continues on.

What are your thoughts on the match?