Chris Benoit hitting a German suplex on the Great One!

Since arriving to the WWF in late January, Chris Benoit had been regulated to the midcard feuding with fellow standout Chris Jericho for most of his run. However, on the July 3rd edition of RAW, Benoit catapulted himself into the main event scene.

On that RAW, Chris Benoit viciously attacked WWF World Champion the Rock with a steel chair. Rock had attacked Shane McMahon, whom he was going to defend the championship against. Benoit put a stop to that with several chair shots. Benoit and Shane clearly have a working relationship.

Three days later on Smackdown, Mick Foley told Benoit that he was disgusted with Benoit for his actions against the Rock but also on Chyna. Earlier on RAW, Benoit had put the Crossface on Chyna. Benoit demanded a title match with Rock and made his intentions known that he was coming for the WWF World Championship.

On the July 10th RAW Benoit and Rock squared off in a non-title match after Benoit issued the challenge. If Benoit were to win the match, he would get a title shot at Fully Loaded. Their match went just under four minutes before we got a screw job finish. The finish saw Shane McMahon call for the bell while Rock was in the Crossface. Rock didn’t tap, so it was basically another version of the Montreal Screwjob. Anyway, Benoit wasn’t awarded the win, but instead DQ’d by the referee.

Despite not winning on RAW, the Rock ended up giving the title shot to Benoit on the 7/13 Smackdown. Rock claimed the issue between them was now personal. However, during the promo Rock was again attacked by Benoit who put the Crossface on the champ. He made it clear that he was going to be the champ.

On the 7/17 RAW, Benoit talked about how he enjoyed hearing Rock scream while in the Crossface. Later on the same program, Benoit teamed with WWF World Tag Team Champions Edge and Christian against WWF World Champio the Rock and the Acolytes. Benoit ended using his chair on Rock and Faarooq to help his team steal a victory. After the match, Rock brawled with Benoit backstage and even hit the Rock Bottom on top of a limo before Benoit was able to flee the scene with Shane McMahon.

On the 7/20 Smackdown, Benoit attacked Rock while he was signing an autograph for a fan. Benoit put the Crossface on the champ to add further punishment. Earlier in the show, Benoit was signed to tag with HHH against Rocky and Jericho. Rock got disqualified after punching the referee. Plus, after the match Rock was able to lock in the Crossface on Benoit to close the show and have some momentum heading into their pay per view showdown.

At Fully Loaded 2000, Benoit and Rock had a really good match that went twenty five minutes. It’s probably one of the more forgotten about matches in terms of getting proper credit for how good it was. Benoit actually won the match when the referee saw a chair in Rock’s hands, though he didn’t actually use it. There was a special stipulation that if Rock got DQ’d, then he would lose the championship. Benoit would have the belt for only a few moments as Mick Foley forced a restart to the match, which Rock ended winning with a Rock Bottom. 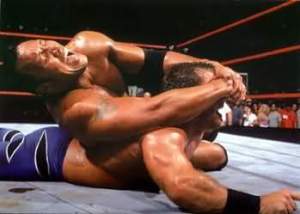 Benoit gets a taste of the Crossface!

Their feud would continue as on the 8/7 RAW they would meet in a no disqualification match for the WWF World Championship. In a really good match, Rock was able to retain the championship thanks to Chris Jericho evening the odds. The match took place at Madison Square Garden, and some believed that Benoit was going to win the championship.

The WWF World Championship would be on the line one more time between the two of them. They were the main event of the RAW show that took place on TNN instead of USA. Benoit would get the short end of the stick as HHH interfered and dropped Benoit across the top rope to allow Rock to hit the Rock Bottom and retain the championship.

11/16 Smackdown was the final encounter between the two for 2000. Rock was no longer the champion, however. They continued the trend of good matches, but this encounter didn’t have a winner due to Rikishi attacking Rock and hitting a Bonzai Drop.

Final Thoughts:
This is a feud that had so much potential but sadly didn’t get the proper build-up to be truly remembered. I’m sure a lot of that has to do with the timing of it and the year, which had a lot of great stuff taking place. Prior to the feud, Benoit was a credible upper midcard, but the feud with Rocky failed to elevate him to a main event spot.

Why would they not just have Benoit beat Rock clean on RAW to set up the match at Fully Loaded? Right there you make Benoit out to be a huge threat to the champion. Instead, they just have Rock hand him a title match because the feud was made personal. Benoit going over Rock on RAW was really needed due to how short of a time they had to promote the match between the two of them. It kind of came across like a last minute decision as the feud wasn’t hyped up after the King of the Ring pay per view.

I remember watching the Fully Loaded event on VHS and being excited that Benoit won, until it was reversed and I was pissed. I wasn’t able to watch RAW nor did I have internet. I was a young kid and caught up via VHS. So old school, I know!

Regardless, these two put on really fun matches and they clicked very well. Sadly, Benoit would go right back where he was prior to this and wouldn’t have a substantial main event run until 2004. Rock, well, he wasn’t hurt by this by any means.

I’d consider it a good feud despite the lack of push for Benoit following the feud. The matches hold up very well.

What are your opinions or memories of the Rock/Benoit feud? Share them below!