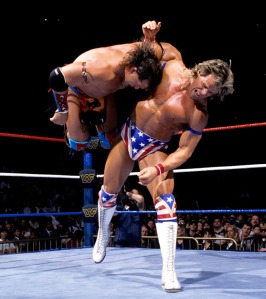 Upon his arrival to the World Wrestling Federation in early 1992, Tatanka had always done the right thing and that led to a winning streak that lasted nearly two years. However, during that run, he never won championships.

The fans loved Tatanka, and the Native American was seen as one of the more popular wrestlers in the company. The argument could be made that he was only behind Bret Hart and the Undertaker at one point. Despite his popularity, he never had a championship moment.

He had his chances, most notably at WrestleMania IX where he defeated WWF Intercontinental Champion Shawn Michaels by count-out, which isn’t good enough for a title change per the rule book.

Following the biggest event of the year, Tatanka fluttered around the card and didn’t have a major feud until the winter months. On Halloween, Tatanka’s undefeated streak came to an end against Ludvig Borga. With Tatanka out of action due to an attack by Yokozuna, Tatanka’s friend, Lex Luger, would wrestle and often defeat Borga.

Tatanka continued to be a mid card talent while his friend Luger, who had just previously been a bad guy, was now being cheered by fans for being an American hero for slamming Yokozuna on the 4th of July.

While Tatanka was left off of the WrestleMania X event in March of 1994, Luger failed to take the WWF World Championship away from Yokozuna. Luger’s frustration was clear and by the fall, Ted DiBiase began to court Luger to capitalize on the frustrated superstar.

Sure, Luger continually assured fans and Tatanka that he was not joining DiBiase, but Tatanka did not trust Luger. There was evidence that perhaps Luger was indeed joining the evil side as DiBiase had walked out of Luger’s dressing room and would often come out and watch Lex during his matches.

With there not being any trust between the two friends, they decided to battle it out at SummerSlam in August of 1994. I often read that everyone saw it coming and then there are times when people say they were shocked. At the event, Tatanka ended up turning on Lex Luger and joined the Corporation, selling out for the Million Dollar Man.

I was a fan of Tatanka’s and thought he would be a fine mid-card champion. When he turned into a heel, I didn’t even care. I don’t think I was sold into him being a bad guy nor did he really come across has being someone I could despise.

Their feud would continue for the next half year and concluded with Luger beating Tatanka inside a steel cage right before WrestleMania XI. How their feud didn’t conclude at that event, considering how long it was dragged out, is rather surprising.

The Tatanka heel run has to be seen as a failure. Aside from the Luger feud, he didn’t really do anything major. For most of 1995 he was just a sidekick to DiBiase never being seen as “the man” of the heel stable. He’d blow out his knee in early 1996 and leave the company for nearly ten years.

On the other hand, Luger struggled to regain any kind of popularity in the WWF. He was part of a short-lived, yet kind of popular tag team with Davey Boy Smith known as the Allied Powers, but they never won any gold. By the fall, Luger ditched the WWF and joined WCW shockingly appearing on the first ever WCW Nitro telecast. He’d never return to a WWF ring.

Would I have done the feud any differently? Yes. Lex Luger was so much better as a heel and had a lot of momentum in 1993 prior to the unsuspected baby face push that amounted to nothing. If you turn Luger back to a heel, there would be a highly desired feud between a corporate Luger and a baby face Bret Hart for the winter months of 1994 instead of a Hart/Backlund feud.

Tatanka’s run in the WWF was likely ending regardless of a turn or not. Come 1996 his character wouldn’t really fit with the direction of the company moving forward.

The attempted heel turn was likely done to elevate Tatanka to a weak heel side of the roster and increase Luger’s like ability as someone who stayed loyal to the fans. Instead, the heel turn proved that Tatanka just didn’t have the ability to rise up the ranks and fans simply had no interest in cheering for a guy like Lex Luger.

What are your memories of the feud between Tatanka and Lex Luger? Leave your comments below!