Last week, I took a look at the first ever Pro Wrestling Illustrated 500 ranking list. The journey of revisiting that history continues here as I look at the 1992 installment of the list. I should note that I’m considering the January to December timeframe in the first installment. I looked up the apparent timeframe that is from August of the previous year to July 31st of the actual year. That being said, I’ll try to maintain my opinions strictly by that timeframe. It seemed as if the 1991 version was covering most of the year, anyway.

For a complete list of the PWI 500 check it out HERE.

At first I wasn’t so convinced that Sting was the number one guy during the timeframe, but you’ve got to remember that Savage was “retired” from mid March until late 1991. Sure, Savage had a strong comeback winning a feud with Jake Roberts and the WWF World Championship at WrestleMania VIII, but Sting held his own feuding with Rick Rude for most of the period and winning the WCW World Championship at Superbrawl in February ’92. I could see the Nature Boy having a better claim for the number one spot than Savage.

Flair left WCW in the summer of ’91, but upon his debut with the WWF he feuded with Roddy Piper and had huge matches with Hulk Hogan on the house show market. Also, Flair just so happened to have won perhaps the greatest Royal Rumble ever and as a result became the WWF World Champion. Flair had a rather strong presence during the evaluation period.

Rude seems a bit high on the list as he didn’t enter WCW until October but didn’t waste time winning gold as he won the WCW United States Championship in November. He also was successful in a feud with Ricky Steamboat winning a high profile match at Superbrawl. He was the leader of the Dangerous Alliance that lost War Games at Wrestle War.

Bret Hart starts to get recognized as an elite wrestler with two WWF Intercontinental Championship wins. He first won it at SummerSlam against Mr. Perfect and after losing it to the Mountie at a house show in January ’92, regained it from family friend Roddy Piper at WrestleMania VIII in perhaps Piper’s last truly great match. Hart was also involved in a house show feud with Shawn Michaels at the time.

After an underwhelming run in the WWF, Ricky Steamboat returned to top ten level wrestling winning the WCW World Tag Team Championships with Dustin Rhodes in November and defeating WCW United States Champion Rick Rude in a non-title thirty minute Ironman match at Beach Blast in June. Also, Steamboat was arguably still at the top of his game in the ring.

Jerry Lawler continued to dominate the USWA along with partner Jeff Jarrett. Scott Steiner comes in at number eight after regaining the WCW World Tag Team Championships on May 3rd defeating the Dangerous Alliance after a long chase. They soon lost the belts to Steve Williams and Terry Gordy on July 5th to end the evaluation period on a sour note.

Kind of confusing that the Ultimate Warrior came in at number nine considering he returned to action at WrestleMania VIII and was only feuding with a midcard talent in Papa Shango. Doesn’t seem worthy of a top ten wrestler let a lot top 50, honestly.

Lastly, Steve Austin makes a splash in the top ten as a member of the Dangerous Alliance. Austin had been dominating the upper mid card scene as he continually held the WCW Television Championship during the grading period. 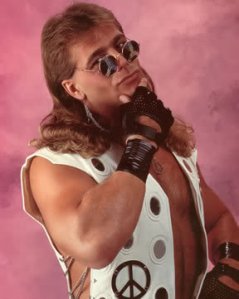 A change of attitude did good things for Michaels.

Hogan falls out of the top ten due to lack of competing. He lost and regained the belt in late 1991 against the Undertaker, lost the Royal Rumble, and defeated Sid Justice by disqualification at WrestleMania VIII in his last match for nearly a year.

Vader’s ranking may seem a little high, but remember he stayed strong in Japan and upon his return to WCW in July he defeated Sting to win the WCW World Championship. Vader is a strong force in the PWI 500 for at least a couple more years.

After a shocking betrayal of his longtime friend, Shawn Michaels rose to number sixteen. He won his first ever Mania match against Tito Santana and continually challenged for the WWF Intercontinental Championship, though he would lose to Bret Hart each time.

During the evaluation, Simmons unsuccessfully challenged Lex Luger for the WCW World Championship at Halloween Havoc. Proceeded to be a mid card contender feuding with Cactus Jack for several months and winning the feud. At the time of the release, it was evident that Simmons was going to become a main event player for WCW.

Taker held the WWF World Championship for a short period in 1991 as a heel. By February, he turned into a good dead man and pinned Jake Roberts at WrestleMania by kicking out of the DDT. Didn’t feud with top talent afterward as he was involved with the Berzerker afterward.

At the tail end of 1991, DiBiase was the WWF Million $ Dollar Champion, which would soon be forgotten about. Entering 1992, DiBiase became a tag team wrestler and won the WWF World Tag Team Championships in February with IRS by beating the Legion of Doom. Successfully retained the titles by count-out against the Natural Disasters at Mania. Lost the belts in July to the Natural Disasters. Adapted well to his new role.

In early 1991, Bossman looked to be primed for a WWF Intercontinental Championship run but the push faded away and for the most part Bossman was lost in the shuffle. Was on the winning side of a eight man tag at Mania, but was soon beaten down by former inmate Nailz. His ranking is rather high considering he didn’t achieve much during the time.

Much like Lawler, Jarrett was busy winning a feud against the Moondogs. Cactus Jack had a breakout time period having a classic brawl with WCW World Champion Sting at Beach Blast 1992, despite coming out on the losing end. May have been the moment fans took Jack seriously as a contender.

Nearly a one hundred spot jump for Dustin Rhodes, who won the WCW World Tag Team Championships with Steamboat. Rhodes is clearly at the top of the heap for WCW and the following year is when he really breaks out. Underrated in the ring even in 1992.

Obviously Owen Hart is a top wrestler but he was only teaming with Koko B. Ware at the time and they hadn’t done anything of note to warrant a top 50 spot for Owen.

Last year, Brian Christopher was ranked at 409 and jumped all the way up to number forty-seven. A change of attitude may have helped as he won many titles in the southern area but did so cheating. Was considered to be a top prospect out of the South.

If the grading timeframe is correct, it’s amazing that Razor Ramon was even ranked. As the Diamond Studd he had a less than memorable run with WCW and while he was with the WWF, his character hadn’t even made it to television until August.

The former Demolition Smash went the route of a comedic character with the Repo Man. Repo didn’t have any major wins but had a brief feud with the British Bulldog on television. I’ll let you guess who won that one.

The voodoo master Papa Shango debuts at number sixty-nine. Due in large part to the exposure of his feud with the Ultimate Warrior. Shango never won a match against the Warrior but faired okay against other mid card talents.

Crush hadn’t made a splash on television yet, but his newfound singles push as a baby face was going well on the house show market. Probably should have been ranked where Repo Man was.

The rookie Marcus Alexander Bagwell breaks into the top 100. Bagwell didn’t have much of a direction but was being touted as a promising star for WCW and typically held his own against top heels but would come out on the losing end most times.

The lunatic Sabu goes from 389 last year to number 79 in one of the biggest jumps of the year. Most notably won the FMW Tag Team Championships with Hulk Hogan’s nephew, Horace Boulder.

Tatanka made his WWF debut in late 1991 and remained undefeated throughout the grading period and only gets ranked at 93. I can see a few people he should have been ranked above but I’ll just be repeating myself.

Brian Lee is the top baby face for Smoky Mountain Wrestling and was their first Heavyweight Champion beating Paul Orndorff in the finals in May. Continued to be considered a future star in the business.

Orndorff hadn’t been seen on a national level in years, but was quite successful in Smoky Mountain Wrestling as one of the top heels in the company. He proved that he had plenty still to offer to the wrestling world.

Hammer made his debut for WCW in 1991 and was involved in a feud with Cactus Jack which saw Hammer win a few battles. According to PWI, he was seen a future World Champion. Van Hammer, of all people.

He hadn’t developed the cigarette smoking, beer drinking gimmick yet but Sandman was still a force on the Philadelphia independent scene during the time. Along with Tommy Dreamer who relied heavily on a sleeper hold to win his matches, apparently. Keep your eyes on Chris Candido as well as he continued to tour the globe and gain experience.

If the grading timeframe is right, and I’m guessing in large part to what the PWI writers commented on, then Justice and Luger should be at least on the list.

Justice had wrestled from late 1991 to April 1992 for the WWF, which saw him main event Mania and almost win the Rumble.

Luger won the WCW World Championship in July and held it until February 1992 when he lost to Sting. He’d be out of wrestling for a year.

Zeus went back to acting. Paul Roma was in semiretirement.

There is the notable names for the 1992 PWI 500. Would you have ranked anyone differently? Leave your thoughts below!