It’s the first look at the Wrestle America magazine. In the magazine, the curse Papa Shango had on Ultimate Warrior is highlighted, a dream match between Bret Hart and Owen Hart, Jim Cornette in SMW, and the friendship between Nikita Koloff and Sting in WCW.

A fan from Brooklyn is confused as to why the Berzerker isn’t charged with a felony for trying to stab the Undertaker with his sword during a recent battle on television. Another fan from Peoria believes that the way to stop the Dangerous Alliance is to put them in a cage since the group lost both the tag titles and the War Games match, which were contested inside a steel cage. A fan from Minnesota is hurt that Jesse Ventura joined WCW as a commentator only because he can no longer do radio broadcasts for the Vikings.

The main points to this section was the return to the independents of Marty Jannetty, which was a success by all accounts. It also highlighted a WCW live event a week before WrestleWar, leaving fans craving the big pay per view event, according to Apter. There wasn’t much substance to this section, really.

Ellner ponders if Vince McMahon will be able to lure the Steiner Brothers into the WWF for a dream match against the Legion of Doom. They’d get there, but LOD would be long gone. Ellner considered the Steiner Brothers to be loyal and they wouldn’t leave WCW because they were happy. That wasn’t entirely true. Larry Zbyszko should have knocked Paul E. Dangerously out at WrestleWar for Dangerously embarrassing him after their loss. Ellner suggests that Dangerously manage Madusa full-time and have her change her name to ET: “so cruel she makes her opponents phone home.” How’s that not a thing in wrestling? Eddie gives Cactus credit for the gentle killing of the Junkyard Dog. He also wonders when will Capt. Lou Albano make a comeback in managing. 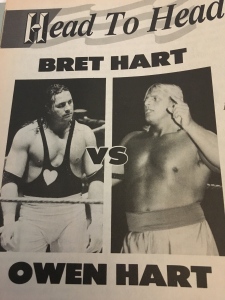 The focus this time around is between Bret Hart and Owen Hart, a feud that would occur in 1994. There are four wrestlers who share their thoughts on the possibility of the match for this edition. They are Mahkhan Singh, Don Muraco, Jim Neidhart and Nick Bockwinkel. Let’s see what they have to say about it.

Singh: Well, he despises Owen Hart for taking the Norther American championship from him and believes Owen is afraid of him. He picks Owen because he beat him and that’s impressive. He thinks that Owen just knows a little bit for than Bret and thus would win the bout.

Muraco: He’d want to promote the match and puts in on par with Hogan vs. Flair, but with two guys in their primes. Muraco thinks it would intense and chooses Bret to win, but it certainly wouldn’t be an easy bout, that’s for sure.

Neidhart: The man that has been close to both Owen and Bret is probably the most interesting man for this topic. Neidhart claims that we’ll never see them compete in the ring since they are extremely close. In the end, Neidhart goes the route of declaring it would be a draw because he’s no fool.

Bockwinkel: He thinks it would be a fantastic match between the two but he’d have to pick Bret Hart because there isn’t anyone else like him in the world of wrestling competing at that moment.

Staks: His main argument is the lack of rules to the match and the complete mayhem that occurs during the match. He has concerns about the amount of blood that is spilled in the match because of how rampant AIDS is in the country. The rules seemingly encourage the rule breakers to win the match due to a heavy focus on brawling and lack of rules in the match.

Ellner: He thinks that fans don’t have the ability to pay attention to a six month feud and want answers and decisions as quickly as possible. Ellner believes that the match gives us a clear cut winner and the men involved know the risks going into the bout, so there’s not argument about the blood and violence. After all, they are big boys.

In this section, there is a question asked and is answered by fans of the magazine. The question is whether or not there should be a limit on how many disqualifications a champion can have before losing the championship. For the most part, fans are in agreement with the idea, even saying that perhaps after one disqualification they should lose the championship. There are a few fans who think it isn’t needed, but it’s mostly people saying some kind of rule should exist. That’s all there really is in this section.

Larry Zbyszko has been kicked out of the Dangerous Alliance after costing the team the War Games match at WrestleWar. Larry had been given one more chance to show his worth in a match against Steve Austin, but Paul E. Dangerously fired him afterward. Nikita Koloff was offered a spot to replace Zbyszko, but turned the offer down because he wanted to maintain a friendship with Sting. Precious has returned to WCW and will head the operations for the Freebirds. Lastly, Missy Hyatt isn’t afraid to challenge Madusa to a wrestling match. 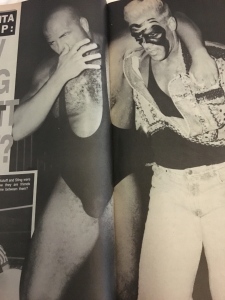 THE STING – NIKITA FRIENDSHIP: HOW LONG CAN IT LAST?: by: Dave Rosenbaum

Sting is the steady calm and trustworthy guy while Koloff is wavering and could cause trouble. Magnum TA provided his thoughts on Koloff saying that Nikita acts on impulse which causes problems. Sting has no reservations about his friendship with Koloff and believes his apology for a chain attack last year is sincere. Koloff saved Sting from an attack at Superbrawl and has said he wants to learn from Sting moving forward. While Sting was out with injury, Koloff replaced Sting in matches against Vader and was victorious several times. How long can Koloff be fine with ebbing second best to Sting? Rosenbaum doesn’t think that will last very long.

There is a 90% chance that SummerSlam takes place at Wembley Stadium in London. Decreased attendance in the States and the sellouts on the European tour have reasons to why the change would occur. A rumored card for the event is as follows, WWF World Champion Randy Savage vs Ric Flair in a retirement match, Money Inc. vs Legion of Doom, WWF Intercontinental Champion Bret Hart vs. Shawn Michaels and the Undertaker vs. the Berzerker. Nailz viciously attacked Big Bossman during a recent television taping taking Bossman off of television for several months. The Mountie is using a shock stick now and his first victim has been Sgt. Slaughter. Kamala has returned to the WWF following a successful run in the USWA where he was a four-time champion.

Warrior was dominating a series of matches against Shango until the curse occurred. Fans were concerned when Warrior dropped to the floor and had to be helped to the backstage area. Shango had control of Warrior’s mind making the feud even. The feud isn’t as one-sided as it was prior and there is doubt that Warrior will be able to escape the curse so that he could challenge for the WWF World or Intercontinental Championship.

GWF North American Champion Eddie Gilbert has been stripped of the championship despite competing in belt vs. belt matches with USWA Champion Jerry Lawler. Gilbert is obsessed with dethroning Lawler because he is a fraud and overrated, in his eyes. Johnny Mantell believes that Gilbert is afraid to compete against him and that’s why Gilbert has left the GWF area with the belt.

In ECW, Peaches is with Sandman but that might not last long due to Veronica being around. Veronica blames Peaches for Sandman’s lost to Johnny Hot Body recently. Brian Lee won a tournament to be the first SMW Heavyweight Champion last defeating Paul Orndorff.

An aerial superstar Bill Wilcox gets props for being a possible American version of Jushin Liger. I’ve never heard of Wilcox prior to reading this.

Jim Cornette has quickly led the tag team of Stan Lane and Tom Prichard to the SMW Tag Team Championships in Smoky Mountain Wrestling. Cornette has the money, fame and the trusty tennis racket that leads his team to championship gold every time. The question at the end of the article is whether or not the Heavenly Bodies would be for sale at some point.

That wraps up this edition of Inside the Magazine, what are your thoughts on this issue and what was going on in wrestling at this time?