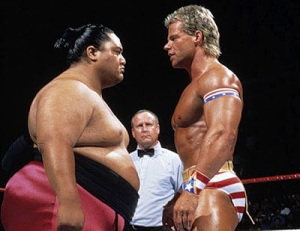 Twenty years ago the World Wrestling Federation was looking for their new Hulk Hogan. They needed an American wrestler that the fans could get behind. No, Bret Hart couldn’t fit that role because he was Canadian despite fans constantly chanting USA during his matches. The search for this man came to an end on July 4th, 1993. It was one of the biggest reveals in WWF history.

WWF World Champion Yokozuna had been tearing up the WWF since he made his debut in late ’92. Yoko won the Royal Rumble and won the championship at WrestleMania IX. Aside from a hiccup against Hulk Hogan, Yokozuna had been unbeatable. On July 4th, 1993 Yokozuna and Mr. Fuji decided to have a competition aboard the USS Intrepid. Several wrestlers and athletes were among the contestants. They included the Steiner Brothers, Tatanka, Crush, Randy Savage, Bob Backlund, Scott Burrell of the Charlotte Hornets and Bill Fralic from the Detroit Lions.

None of those men were able to slam the huge WWF World Champion. This left thousands of fans disappointed as the hated Yokozuna waved the Japanese flag in their faces. That was until a helicopter appeared about the ship. When it landed and people cleared away from it, it was revealed to be Lex Luger decked out in an American shirt and wearing cowboy boots. Luger would enter the ring and slam Yokozuna to give the fans something to cheer for. The cheers Luger heard were not usual for him as the six months previously, Lex had been obsessed with himself and believed he was the perfect specimen.

Naturally, Luger demanded a championship match against Yokozuna but Mr. Fuji claimed that Luger was a cheater due to Luger using his forearm that had six rods in it. Thus, Luger decided to go on a campaign all across America looking to get a WWF World Championship shot. This would be known as the Lex Express. Luger would ride in a bus going to cities all over the country to get fan support for a championship match.

On the August 9th edition of RAW Lex Luger and Yokozuna had a contract signing. There wasn’t any physical contact, which was surprising. Jim Cornette, a new mouthpiece for Yokozuna, revealed that their was a clause in the contract. The contract stated that this would Luger’s only chance at the WWF World Championship.

The showdown at the Palace in Auburn Hills, MI saw Lex Luger defeat Yokozuna… by count-out. As many of people know, the championship can’t change hands via a count-out. Despite this fact, several top babyface wrestlers came out and celebrated the win with Luger. It was over the top and kind of looked foolish. 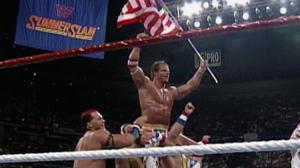 After the event, Luger would appear on television and thank the fans and hope they stay with him as he looks to win the WWF World Championship from Yokozuna. Sadly, Luger can’t get a title shot due to the stipulation that Cornette put in the contract. Remember?

They would meet again at Survivor Series in November where Luger and Yoko would captain two teams. Luger’s team consisted of the Undertaker and the Steiner Brothers. Yokozuna had Quebecer Jacques, Ludvig Borga and Crush. Luger prevailed for his team and was the sole survivor giving him even more momentum towards a future title shot.

Jack Tunney would make it very difficult for Luger to get a second title shot. After a few weeks of campaigning, Luger was awarded another chance to earn a title shot. This time, Luger would have to win the 1994 Royal Rumble. Originally, it was teased that Luger wasn’t going to be allowed in the match but Tunney put him in the match.

Luger would win the 1994 Royal Rumble, but for the first time in Rumble history he would be a co-winner. That’s right he co-won the match with Bret Hart after they both went over the top rope and landed on the floor at the same time. Earlier in the night, Bret was betrayed by his brother Owen Hart and his knee was injured. All that considered, the fans were heavily behind Bret. Eventually, it would be announced that they would both get title matches at WrestleMania X. Luger would get the first shot.

Yokozuna would win the match at WrestleMania X after special referee Mr. Perfect screwed Luger over. This marked one of the most famous pushes in wrestling history to not end with a happy note. Luger never won the WWF World Championship. 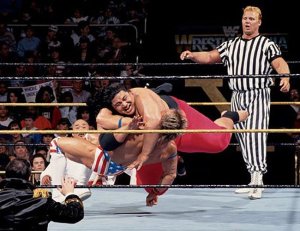 Bob’s Opinion:
When I reviewed WWF RAW and Superstars from this time period I didn’t like having to watch it from July 1993 to December 1993. Mainly because the company tried so hard to make Luger their next Hulk Hogan. It never truly clicked with the fans. It was just over the top and maybe phony to me.

Their match at SummerSlam had them in a pickle, too. Yoko needed momentum but having Luger lose would kill off that babyface character. So, they have him win but not the title. That would have been fine, but doing the over the top celebration was horrible. It took me ten years to actually watch the show since I as four when it happened. Watching it when I was 14-years old I laughed at it knowing they are going nuts about the match and Luger wasn’t even the champion.

Lex Luger was never the top babyface in the World Wrestling Federation. He never truly was. The top guy was Bret Hart and it took the WWF a full year to realize it. Luger had the look and all that but Bret had the connection with the crowd and the ability in the ring. So, the decision to put Luger up against Bret at the Royal Rumble was a poor call to make. Luger was destined to fail at that point.

For me, it’s not a fun or entertaining feud. I don’t have a fun time watching it and I probably won’t ever again. There never was the happy ending finish to the feud, which probably hurts it even more for me.

What are your memories of the Lex Luger vs. Yokozuna feud? Feel free to leave your thoughts below!