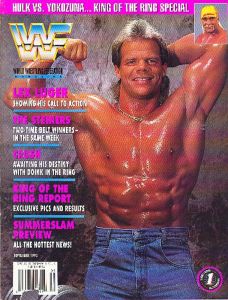 In this edition of Inside The Magazine, WWF Magazine from September 1993 is looked at. In the magazine, Shawn Michaels goes on a date with Rhonda Shear. The Steiner Brothers won the tag titles twice in five days against Money Inc. Crush sits down for an interview. Also, the WWF responds to Billy Graham and his claims.. and boy does it get ugly. All that and more!

AROUND THE RING: written by: Ed Ricciuti

Ed believes that Jerry Lawler was a coward for attacking Bret Hart at King of the Ring but he will get what is coming to him at SummerSlam courtesy of the Hitman. He wants to find out who the creepy camera man at the King of the Ring was that cost Hulk Hogan the WWF World Championship against Yokozuna. Apparently, the name of the photographer was named Mervin Smith and they’ll look into solving the issue. Now that Yokozuna is the champion Ed feels that someone needs to standup for America and is capable of dethroning Yokozuna sometime soon.

Recently, there have been a few title changes at non-televised shows with Shawn Michaels pinning Marty Jannetty to regain the WWF Intercontinental Championship in Albany, NY and the Steiner Brothers trading the tag titles with Money Inc. So, be sure to attend your local WWF shows because you never know what will happen! Ed also gives Hillbilly Jim credit for being a great representative for the WWF making several public appearances for the company.

The question was asked in the July edition of WWF magazine if fans would like to read about wrestlers on the road. It’s an overwhelming response of yes. That’s pretty much what this portion of the magazine is. There aren’t any road stories or anything else. That might be in future installments.

Bam-Bam Bigelow and Luna Vachon, match made in heaven.

Luna Vachon and Bam-Bam Bigelow are now a pair in the WWF and it’s a perfect fit. Fans are wondering when Randy Savage will get back in the ring, but don’t want him to retire from commentary, as well. Crush is given advice telling him to use his smarts more since Doink has really outsmarted him lately and perhaps he needs a manager to help him. Shawn Michaels is quite confident after his victory over Crush at KOTR, but his luck is due to run out. The Headshrinkers deserve a shot at the tag team titles since they have been a dominate force in the WWF in recent months. Jack Tunney must have gotten the referees to open their eyes with their recent enforcement of the rules in matches involving Mr. Hughes and Bret Hart recently. They blast Marty Jannetty for his short reign as WWF Intercontinental Champions saying he blew his opportunity and when you’re champion you need to hold onto the gold longer than a few days.

NEWS BEAT HOT OFF THE PRESS

Oscar from Men on a Mission provided a rap for magazine putting over the WWF and the publication as being can’t miss. Mr. Perfect and Bret Hart had a competitive match at King of the Ring, which Bret Hart prevailed in. They want to do it again at some point, which excites the publication and fans. Fans might be wondering why they haven’t seen High Energy recently. There appears to have been something happen between Owen Hart and Koko B. Ware and they are going to find out what happened.

Men on a Mission

This month Men on a Mission is profiled for the magazine. Mabel is put over for his size and ability to deliver moves like spinning heel kicks and big splashes off the middle rope. They are from the streets in Bronx but they haven’t allowed the bad streets impact their judgment in the WWF. Their goal is to set a good example for troubled inner city kids.

Crush sat down with the editors of WWF Magazine for a chat. Crush believes that Doink is out to ruin his career and it all stems from the time that Crush prevented Doink from bothering kids in the crowd at a WWF event. Crush promises to take care of both Doinks at some point in the future. Crush gets frustrated with the two Doinks, who are very real and not an illusion as Doink claims. He’s going to beat Doink so badly that he won’t be able to tell himself from the other Doink. Crush recalls his match with Lex Luger over the spring as the moment that he really believed he could hang with the top talent in the WWF and he felt connected with the fans. Crush has his goals set and that includes going after Yokozuna to win the WWF World Championship because he’s tough enough to get it done. Crush notes that he is faster than Yokozuna and would fare well in the ring with him and if Mr. Fuji got involved he would squash him like a grape.

BATTLE OF THE TITANS: written by: Ed Ricciuti

The focus this month is the WWF World Championship match between Hulk Hogan and Yokozuna at King of the Ring, which saw Yokozuna win the championship for the second time due to a photographer throwing fire into Hogan’s eyes, apparently on accident.

Shawn Michaels and Rhonda Shear on a date.

WWF Intercontinental Champion Shawn Michaels went on a date with USA Network Up All Night host Rhonda Shear in Reno, Nevada. They had met a year earlier on Rhonda’s late night show and Sensational Sherri, who was seeing Shawn Michaels at the time, warned Shear to stay away. However, now with Sherri out of the picture they recently went on a date. They had a few romantic moments around the pool and in the hotel room, but Shawn’s bodyguard Diesel was always around so it kind of killed the vibe. Michaels hinted that he might visit Rhonda on her set to see where things may go. Of course, Diesel would be with him, too.

It’s a rundown of the matches scheduled to take place at SummerSlam on August 30th. Luger is shown dressed as the Narcissist still despite having been turned into a face and it is noted later in the magazine. All the matches are the same as we would eventually get aside from Marty Jannetty vs. Rick Martel, which would be Jannetty vs. Ludvig Borga, instead. Also, Tatanka was advertised to wrestle Bam-Bam Bigelow with Sherri in the corner of Tatanka, but that was switched to a six man tag match involving the Smoking Gunns and the Headshrinkers.

Oh boy, it’s the part of the magazine where the WWF sets the record straight about Dr. George Zahorian and his involvement with the WWF. Superstar Billy Graham decided to testify on behalf of the government and his motives were clear from the onset. Graham tried to blame Zahorian for his steroid abuse through the years. Instead of taking responsibility for his actions, he blamed Titan and Zahorian. Zahorian was convicted and Graham sought 1.25 million from the WWF. The WWF refused to pay and Graham threatened that things unrelated to the case would be revealed to hurt the WWF if he didn’t get the settlement.

Graham sat for a deposition that revealed he took steroids many years before he ever got involved in the wrestling business, let alone the WWF. Graham was shown to be lying when he claimed that Zahorian provided 95% of his steroid abuse and had many doctors in Phoenix providing him with the drug. And here comes some nasty comments…

Billy Graham is a high school dropout who has never had a regular job. He left two children behind when he got married for the fifth time and owes child support. Graham has admitted to abusing steroids for 23-years from 1966 to 1989. Graham spent just over one year with the WWF during that timeframe. After failed attempts at football, bodybuilding and even being a bouncer, Graham tried to wrestle for the WWF, but was seen as washed up and his run lasted only six months from October 4th 1982 to April 25th, 1983. Graham admitted he was a drug addict during that time and overdosed twice.

Graham began to have issues with his left hip in 1984 and asked for work as a wrestler. His return match was awful and he clearly favored his hip and told the WWF afterward that he needed hip replacement. He essentially defrauded the company. However, Vince McMahon decided to pay $30,000 for a hip operation to help Graham. The WWF also paid Graham $1,000 a week during his recovery. Upon his return, he tried many different jobs in the WWF but didn’t do a good job at any of them. For three years of bad work, Graham was paid $200,000.

They promise to provide facts on other casts of characters that are out to hurt the WWF in later issues. So, be out on the look for that.

LEX GOES FOR THE BIG ONE

Highlighting Yokozuna’s open challenge on the USS Intrepid where he challenged any superstars or athletes. After several athletes and WWF superstars failed, the world was shocked to see Lex Luger come out of a helicopter and in the USA colors. Moments later, Luger slammed Yokozuna! As a result, Luger is now the number one contender to the WWF World Championship, held by Yokozuna. They will meet at SummerSlam on August 30th. There’s an ad for the Lex Express call to action, too.

Paul Pitcher from Maryland has won a contest to eat dinner with any wrestler in the WWF and he chose Bret Hart. There will be a feature of it in another WWF Magazine. Hulk Hogan has a lot of fans in Eastern Europe and many wrote into the magazine to let it be known. Bobby Heenan won the Sexiest Man Award, but the editors think that Heenan rigged the voting since all the votes were from Heenan’s hometown. So, Heenan may have casted all the votes on his own behalf. A few wrestlers and their public appearances are noted, along with a successful tour of Europe recently for the WWF.

Smoking Gunns are asked if they use real bullets in their entrance, but they only use blanks since real bullets would be dangerous and against the law. Nobody knows where the Ultimate Warrior is at, but once they find out they’ll let everyone know. Sherri Martel is going to put Luna Vachon in the hospital when they meet in the ring. Money Inc. responded to being called thieves saying that they have so much money they could go on a long vacation if they feel like it. Bam-Bam Bigelow considers anyone who gets in his way as his arch enemy, and that includes editors of the magazine. Bret Hart thinks his only weakness is maintaining the level of wrestling ability he competes with every night because it puts a lot of pressure on himself.

What are your thoughts or memories on this WWF Magazine, or what was going on in the WWF at this time?